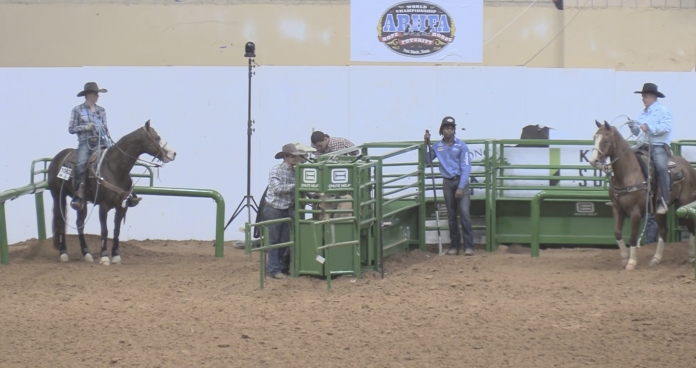 Breaking it Down by Speed Williams – December 2022

I teach people how to improve their riding and roping, whether it’s heading, heeling or breakaway. When clients first come, we run five to seven steers and I prefer for them to ride two different horses. Normally I don’t say much and reserve the right to wait and watch the video because sometimes I don’t always see all the factors while they are happening.

Everyone watches the video play through, then we watch it in slow motion frame by frame. Whether it’s the top ropers in the world, or a guy that’s only been roping a few years, the video can be very humbling. The top guys know better than to do some of the things they get in the habit of, but they get caught up in watching the rope and the horse and don’t always pay attention to their feet and hands. Guys who have never watched themselves are usually shocked at all the things they are doing wrong.

Amazingly after all the people and videos I have watched and studied, there are still things that come along I have never seen before. I truly enjoy teaching people something I have had a lot of success with. But I’ve found a flaw in my teaching that I’ve not experienced before, and it’s surfaced while helping my son with his heading.

Gabe is a #9 heeler and #6 header. He ropes the horns pretty good, but his scoring and handles leave a lot to be desired. There are some simple steps a header does when he rides in the box: 1. Make sure the arena is clear; 2. Make sure your heeler is ready; 3. Get ready to rope. With Gabe his heelers better be facing forward and paying attention because he could go without them.

I made a deal with him this week to work on his heading. I told him as a #6, he has an opportunity to win a lot more in the #14, #13, and #12 than we do roping against the top 15 in the Open. I told him I’d rather him take my head horse, Green Light, this weekend, and us not roping in the Open. He did a good job heading for me in the #14, better than I did heeling for him. I lost a leg on the first one, broke the barrier on the second, and missed the third.

Then he headed in the #13… He did a good job of watching his heeler get in the box. But when the heeler got in the box, the flagger happened to ride across the arena, stop in front of heeling box and get off his horse to pick something up. Well, my son watched the heeler go in the box, sees his heeler ready and nods. The flagger is standing in the middle of the arena. They still manage to make a clean run and are 7. The flagger is talking a little trash to Gabe and asked if he didn’t see him. He literally flags him standing on the ground. Gabe rode up and said, “I watched the heeler ride in, saw he was ready, looked at the cow and nodded.” I told him we need to add another step, to make sure the arena is clear.

It’s always been my philosophy to never raise my voice to my kids in competition. When you fail or do things wrong, that’s not when you want someone chewing on you or lecturing you. I have always been very patient with Gabe learning to heel and waited for him to come to me with questions. We talk about it and watch the video.

However, now with him learning to head I find I have to contain myself. I don’t know if it’s that much more exciting or the challenge, but I tend to say more to him about his heading than I ever did his heeling. I told him the other day I need be patient and let him develop his own style, but I can help him eliminate a lot of mistakes and simplify the process. I admit the heading mistakes hit home a little more. He’s doing a lot of things right, but gets excited when he hangs it on one, and I’m like, “Buddy you have got to slow down.”

This weekend he didn’t win anything heading but I believe this was the day he understood what the assignment was. He said, “Dad, I really have to rethink what a handle is.” I told him when he’s heading in the #14 through the #12, he needs to remember those are not #9 and #10 heelers behind him. I’ve seen a lot of guys during my career that could really rope and hang it on steers. But one thing I was known for was handling steers and keeping their feet together. There truly is an art to it. So, it kills me when he gets out and catches one and makes it difficult for the heeler to catch. I’m trying to get him slowed down and explained that even if you don’t win first, if your heeler catches them all by two feet you will win money.

I’ve found a weakness in my teaching because of the desire to teach my son to head. Because I think one of the worst things you can do as a parent is give your child too much advice. They must want to hear your opinion and will listen more if you only give it when necessary or when asked, rather than telling them every minute what they’re doing wrong. So even if I don’t say anything to Gabe, I’m not controlling my facial expressions well, because he will say, “Dad don’t give me the look.”

Handling steers is one thing I can’t work with him on the Speed Trainer. We can work on his left hand, his feet, his loops, and his left and right leg position. He does a lot of things well, but we have to slow down and help his heelers out a little. I have high hopes for his heading while we’re in Wickenburg.

I will be posting videos on speedroping.com showing me teaching my son to head and a few of them will probably be comical. It will give a little insight to behind the scenes and what we’re trying to fix.

What’s new with me: We are getting ready to head to Arizona and then on to Las Vegas for the World Series finals and the NFR. This has been the best year yet for my private lessons. I have some clients that come for five to seven days and we’re able to accomplish a lot in that time. We use the Speed Trainer and video and then break it down. Every client is different, but I try to find two or three things that make the biggest improvement and build on that foundation. Whether you’re trying to be faster or more consistent, how well you ride and control your horse determines how quickly you improve. This what makes the Speed Trainer invaluable. If you cannot ride correctly, it’s hard to improve your roping.