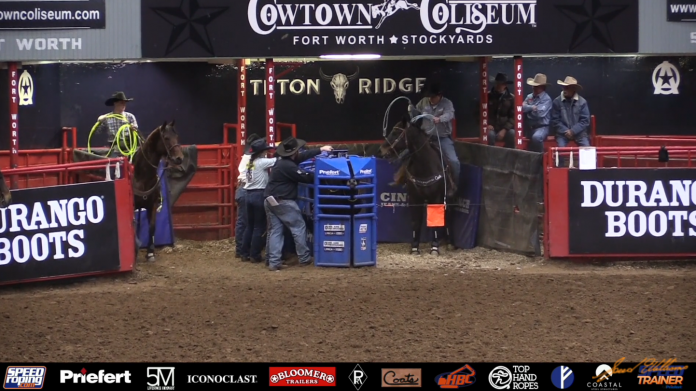 Breaking it Down by Speed Williams – April 2022

For one person to have the opportunity to win over $2 million in the sport of rodeo… all I can say is Wow! I’ve won a little over $2 million in my career and these opportunities are here now for my kids and all the current competitors, its mind blowing. I’m very impressed with the concept of the American Rodeo and what it’s become. I haven’t met the folks at Teton Ridge personally but have heard good things about them and their plans for the American.

This year I told my son we would try to qualify for the American. My plan was to try and qualify at the NTRL Finals Open in Jacksonville because the Open ropings in Texas are tough with NFR qualifiers at every jackpot. But Gabe comes to me and says there’s a #15 tomorrow and can we rope. We happen to have a rare day off and so I agree. Then he tells me there’s an Open just before the #15 and it’s a qualifier. I tried to tell him my horses were not ready for the Open, but he reminded me I told him we would try to qualify.

I did have quite a few heelers pick on me because they’ve asked me to rope in the Open the last few years and I’ve turned them down. I told them, it’s a little hard to tell your son no. He tricked me into roping. He didn’t try to sell me on the Open, but once I had committed to the #15, he threw in the Open.

Before the roping we get up early the next morning and I ride three horses and pick which one I’m taking. I can’t say it was pretty, but we did qualify for the American in the Open. He’s excited and I’m not as excited because I know now, I have to start really working at it. It’s one thing to rope every day, work your horses and turn cows for clients. It’s a totally different thing when preparing to compete.

We have two months to get ready for the American. My horse gets a slight tear in his suspensory. So, Chad Havens offers to loan a horse. I told him I might take him up on Pepper, the horse I sold him that I rode when I roped with Wesley Thorp. Pepper’s been to the American and we made the final four on him. Over the next couple of weeks, we start going to the rodeo at the Cowtown Coliseum where the American Preliminaries will be held. The box there is 13’ 10” and 10’ wide. It’s a little dead trap. We go over there three weeks in a row. One night we rope in the slack after having lessons all week. I get home and lay down at 4:30 a.m. and have a big school that morning. It felt like the old rodeo days.

For three weeks in a row, we are some kind of 4. We place twice and the night before the American we were 4.6 and didn’t place. I’m feeling pretty good that I can give my son a chance.

Brian Johnson had called and asked if I had another run. He said his son, Colton, had a spot and asked if I would rope with him. I roped first with Colton, and we drew a good steer and we’re 4.2 on our first one. Two good clean runs will have a chance to qualify for the American. Gabe and I back in the box. I’m not nervous because the last 7 or 8 steers I’ve run well. I have a paint steer that looks good. Standing in the chute docile, not fighting. I might have to give him a little extra, I can reach, and I feel good. When I nod and the gates open, he pauses for a split second. He doesn’t go anywhere then when he leaves, it was like he was shot from a cannon. I’m still going to be okay I raise up, take my third swing, and he comes to me, and I barely tick the left horn.

When I rode out of the arena there was a lot of anger inside of me. All I wanted to do was give my man a chance and it ain’t that hard. I’m reliving the effort I had made for two months. Then I’m wondering what I did wrong. If I ran him ten times in a row, not knowing the cow in that situation, my success rate is not very high. Because he looked slow, I predetermined that he probably wasn’t going to run fast. We came back on our second and he went hard left and I missed him. Colton and I came back and we’re 4.5 and loses a leg and we still make it to the performance.

Colton and I drew a good one on our third. We needed to be a 3-something to place in the round. The top six on three-head made it to the American and we needed to be fast. Trying to be fast Colton tried him in the switch and missed him.

My daughter made the top 30 performance in the Breakaway. Her calf slowed up and she barely broke the barrier to make it to the Contender round. Lord willing, we will all three qualify next year. We’re looking forward to it already.

Now I have the BFI. I have entered with my son because that’s one roping he has always dreamed of roping in. That was his Christmas present this year, that he and I would rope together at the BFI. Now I figure out what I’ll ride. This is a dream come true to rope with my son and for him to have this passion about roping. I’m truly excited for both of my kids and their roping careers. I’m sure next month we’ll talk about how the BFI went and I hope I can give a better report than I did on the American.