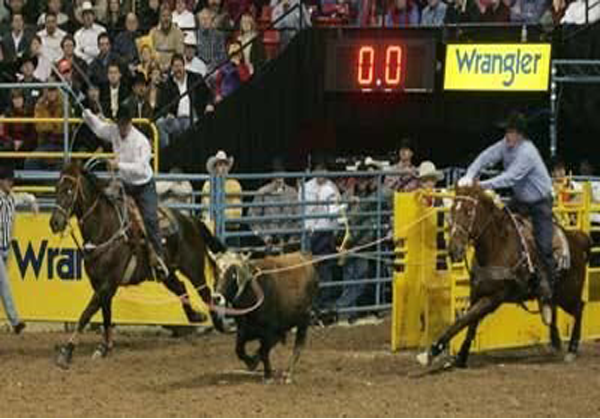 Roping right to left.. or both horns at the same time

Lately I’ve found myself teaching a lot of beginner headers. For them, the answer is easy. They need to learn to rope right to left… first. When you rope both horns at the same time, you’re throwing straight forward and turning your thumb down. It’s like learning to put English on a cue ball before learning how to shoot a straight shot. For me, most of the steers I’ve headed have been both horns at the same time. But I can also run close, rope right to left, and catch a big horned steer that steps into me.

Beginners normally compete in lower numbered ropings like the #7, #8, or #9. Most of those ropings have slow, big horned steers. Once you get close to the cow, roping both horns at the same time becomes more difficult. That’s why I didn’t teach my daughter to rope both horns at the same time. She’s had a lot of success at being able to run close, rope right to left, and catch a high percentage of her cows. She also hasn’t missed much in the short round when it’s exciting and hearts are pounding.

Once she became a #6 header, we started working on roping both horns and getting some range on her throw. Roping both horns at the same time is like throwing a baseball across the strike zone. If you let go a little early, you miss the left horn. If you hang on too long, you miss the right horn. During short rounds when your heart gets to pounding and you’re holding your breath from nervousness, these things play a factor.

Don’t misunderstand, we’re not going to rope right to left at the rodeo. But at a #7 through a #10 roping where all you have to do is catch, it’s a simple mathematical equation to swing your rope over the horns, get in position, and cover a big area with your loop. Versus roping both horns at the same time where your margin of error is much smaller. I’ve seen a lot of people throw an outstanding loop on the dummy and get a lot of action on their loop. But then when they’re roping steers, if the steer moves a few inches left or right they end up splitting the horns when all they had to do was catch.

What’s new with me: I truly don’t know how I survived without a roof over the arena while teaching. We’ve been very fortunate that once our covered arena was finished, we’ve stayed busy with schools and had a lot of clients. We don’t have sides on the building, which is nice because we have a pretty steady breeze that blows. The other day it was 101 but it was completely nice in the arena. Now once you rode out from under the roof it was brutally hot.

When I teach private schools, whether it’s new clients or my regulars, we start out roping steers. Just like Rich and I used to do. We practice then watch the video and break down what’s going on. I start out telling students to pretend they must faster than 11 seconds to win $350,000 in Vegas and for them to show me their run in that scenario. Then we do 9, 7, and 5 second runs. We usually run a few more and then get on a second horse. I like seeing them ride a second horse so I can tell if there’s a common problem on both, and how much of it was them or the horse.

Then we go in and watch the video. I’m watching the left hand, the feet, and the swing and looking to see what is causing problems. Or what I call the chink in the armor. Every school is different. For some we spend more time on the Speed Trainer, and some we spend more time on the Hot Heels depending whether the focus is horsemanship or roping fundamentals. I truly enjoy teaching and having my kids there heading and heeling and helping me with schools, it makes it a family affair almost every day. Except now we don’t have to be in the rain or sun.

Practicing for a good start

Breakaway… where is headed and how big will it get?