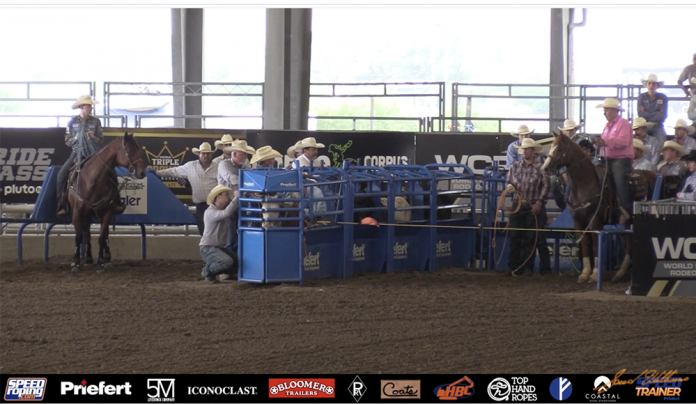 This month I have a funny story to share. Almost every day I do private lessons where I teach people how to catch, especially the steer where you have eleven seconds to win the roping. It’s one of the things my kids and I work on constantly. While at the BFI this year a man named Dale Davis was on me for not nominating some rodeos and trying to qualify with my son for the WCRA rodeo in Corpus Christi. Gabe heeled so well at the BFI and the following week was the last week to qualify. Hali had already qualified in the Breakaway. So, Gabe and I entered Northside and won second at the rodeo earning enough points to qualify for Corpus Christi.

At Corpus there are 40 qualified teams, and everyone runs two. The top 24 make it to the performances. The day monies pay $1,600 so a lot of guys try to go for money, and some just try to catch. Gabe and I were 6th team out and made a good conservative run of 7.1. My goal was to make the rodeo with my son. We came back on our second one and drew a red steer that didn’t run hard but stepped a little left and rolled his head back. I ran up in the middle and took an extra swing. When I threw my rope, I had a lot of speed on it and it hit him in the side, and as he checked off, it came off the left horn. This miss ranks up there with the time I broke the barrier on my high call steer at the BFI.

Now, I am not one to show emotion in the arena. I was raised to not show emotion and to handle losing with class like you handle winning. In our family, with both of my kids, we have a 10-minute rule. When something goes wrong, you get ten minutes to process it and then we talk about what happened. After this run my daughter walks up and says, “10, or maybe 20?” and I said, “Maybe 20.” She laughed and walked off. She knows this is everything I preach and talk about. My wife sent me the video and I watched it. My horse does step a little as I throw and the steer checks. I was swinging fast, and it hit him in the side and opened up and came right off the horn. Not much I would have done different. I was kind of okay, there wasn’t a major mistake like splitting the horns. I just didn’t think there was a high possibility of my rope coming off those big horns.

In the Breakaway, my daughter does the same thing. She made a good run on her first calf and was 3.3, just outside of placing in the first round. She came back and drew a very slow calf that faded left. She just needed to catch because I don’t think half the girls were clean on their first one. Very tough situation with calves that changed speed and direction, plus the wind was blowing across the arena so there were occasional gusts.

When Hali threw her rope on her second calf, it tipped his head, and he ran through it. I gave her 10 minutes and walked up, smiled, and said, “I just don’t understand how you can miss when all you have to do is catch.” She answered, “Really, Dad?” I told her I felt her pain much more than she realized.

We both made it back in the top 24 with one head. She roped last night and won her performance and is headed to the showdown Saturday night. Gabe and I rope tonight.

It was very humbling for both of us because we practice horsemanship, making high percentage throws and focus on not making those mistakes. Now it’s a clean slate and hopefully Gabe and I make it back. They will run eight teams and two progress to Saturday night. One thing the WCRA has allowed me to do is go to Cowtown rodeo and qualify to take my boy to a big stage and give him experience at a bigger rodeo. I’m pretty sure we’ve already qualified for the WCRA in Salt Lake City in July.

I had a young man that came for a week’s lesson and when we qualified for Corpus, he was very willing to reschedule and excited to see what we did. One of best things about private lessons is they can come to school during the day and then we go to rodeos at night, where they can put into practice what we’ve been working on.

I couldn’t be prouder to be here at Corpus with both of my kids entered and know they are competitive. Honestly, I have to credit much of their development to the work we’ve done on the Speed Trainer by Priefert. We’ve been able to work on their horsemanship and they’ve been able to learn to ride and use their hands and legs correctly. For all you parents who are tired of buying horses for your kids, you should look at the benefits of learning on the Speed Trainer. I’m more than happy to answer any questions you have. You can message me on Facebook or email me at: speedroping@gmail.com. It’s made a world of difference in my kids’ roping and riding.

My world has come full circle, we are back on amateur rodeo trail.

The video of our runs is available to watch on this site.

Hali is hitting the rodeo trail

All you have to do is catch… WCRA Corpus Christi