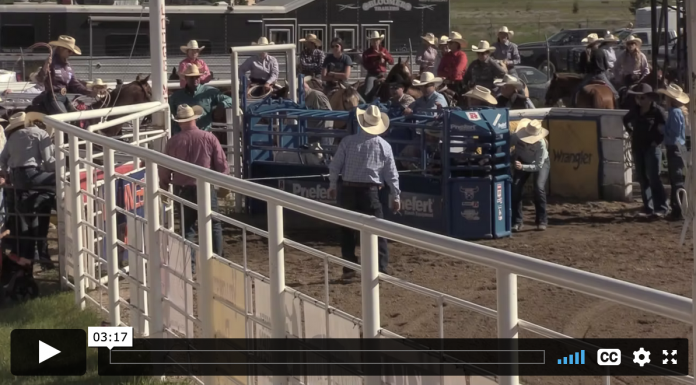 Breaking it Down by Speed Williams – August 2022

It feels like old times as Gabe and I head to Gillette for the National High School Finals. He and his partner, Mason Vaculin, are the current Texas High School Rodeo state champions. We have a busy couple of weeks ahead of us. We have a school in Nebraska on July 14 & 15. We get to watch Hali rope on the 16th. Gabe ropes at nationals on the 18th and then we head to Salt Lake City for the WCRA rodeo on the 20th. We’ll be in Laramie, Wyoming on the 21st for an Open American qualifier. The next day he ropes his second steer at nationals, followed by the short round on the 23rd. The plan is to make the short round at Salt Lake City on the 25th. Then, hopefully, we get to see my wife and daughter for a few days before heading home.

This has been a very unusual year so far but looks like what my future will be due to the success my daughter has been having in the Breakaway and my son in the Team Roping. Gabe feels like we should be going everywhere. We have just a few months before he turns 16 and then we’ll be trying to keep the wheels on his truck from catching fire. There are so many life lessons I’ve tried to teach my kids through rodeo.

During Covid, we posted a video where I set up obstacle courses at my place and taught my kids how to back up a rig so when they got somewhere they would never have to ask someone to do it for them. You can’t imagine how many times I’ve had to back a rig up for someone because they were uncomfortable doing it. I want my kids to be comfortable driving, and how responsible it is to know where you’re going; and to have a plan of where you’re stopping on overnight drives. There’s so much more to rodeo than roping. Lots of preparation, taking care of your animals, and understanding that they can have a rodeo or roping without you. There are times you’ll be better prepared for the next one rather than try to make them all.

Because it’s almost impossible to rodeo without sponsors, I’m teaching my kids the importance of surrounding themselves with sponsors who believe in them. And for them to build a lasting and loyal relationship that is beneficial for the sponsors as well as for them.

Gabe is now an 8+ heeler and one of the things we try to stress is the importance of making your horse work correctly in the practice pen, and not just rope for yourself. The practice pen is preparation for competition and being able and ready to overcome obstacles. We work on little things like keeping his hand in the center when he’s dallying. I will put him on the Speed Trainer and set up a scenario for the loop I’m trying to get him to throw. I want him to pull off all kinds of shots and still be able to control his rope. He needs to be able to ride his horse correctly and not give up his horsemanship to catch the cow. One of the struggles I’ve seen with higher number heelers is being able to keep their horse working on the road. For many, after about six rodeos, their horses quit working and are trying to cheat. When you’re rodeoing it’s difficult to keep your horse working so you can make successful runs.

Thankfully I can help both my kids and my clients to figure out what the problem is when things are going wrong, and how to fix it. Video doesn’t lie when it happens multiple times. As a heeler, sometimes it’s not your fault, sometimes your header needs to do a better job. There are a lot of heelers who have the mentality they should be able to catch them all but that’s unrealistic.

We are all going to have bad days where things don’t go according to plan, but the most successful figure out to shorten that curve. I’m a firm believer that being able to lie to yourself and believe you did good on the last steer, and not dwell on what you did wrong, will help you have the confidence and faith in your preparation to overcome the next one.

At the National Finals in 1998 my first three rounds went as bad as it could go. I had just bought our first place, built a barn, and gone in debt. Out of those three rounds, I had one time down. That third night I dreamt that my barn was repossessed, and I lost everything. But when I backed in the box for the 4th performance, I firmly believed I had won the first three rounds. We placed in the next seven rounds. You have to be able to block things out when it’s not going according to plan. Confidence comes from preparation and knowing that your preparation will help you when you compete.

How many thousands of cows have I run with my son and said, “Here’s our high teamer and we have to be 11 to win the roping.” When that scenario finally happened at the WSTR Open in Hamilton, TX, I was nervous. Not for my son, but for myself because this is what I teach every day. Score, ride your horse, take a high percentage shot when you have the opportunity.

That was when we won our first Open roping, and it was a huge steppingstone. Of course, all the top 15 ropers were gone to PRCA rodeos. I told Gabe if we stay out of battle with the top 15, we have a chance. He looked me dead in the eye and said, “Dad, we have a chance anyway.” You have to love his confidence.

What’s new with me: As I said above, this will be a busy summer for our family hauling the kids. Jennifer and I wouldn’t trade it for anything in the world. Keep an eye out for videos on speedroping.com.

Rodeoing with my son

Back on the rodeo trail, but it’s not what you think

Hali is hitting the rodeo trail